While the Atlanta Beltline and Silver Comet Trail are the most high-profile multi-use trails in Georgia, dedicated pathways for walking, jogging and biking now crisscross the state. Communities are pursuing linear parks to encourage exercise, promote alternative transportation and connect residents to their favorite spots in their cities.

The popularity of the rails-to-trails movement is a reminder that the success of these projects is more about the journey than the destination. Author and landscape architect Randall Arendt called greenways “an essential component of truly civilized, healthful community design,” in the Congress for New Urbanism’s Public Square journal.

“However, even when a site is level and virtually featureless, a touch of imagination and a strong interest in providing green connections are all that are needed to produce a community layout that rises well above the distinctive new urban pattern of blocks and neighborhoods,” Arendt said.

The city of Newnan’s LINC multi-use trail is designed to connect historic downtown west of Interstate 85 to the new growth east of I-85. The first 1.4 miles of LINC opened in 2019, with a pedestrian bridge following in January 2021. The second phase will bring the constructed mileage up to 5 miles.

The glowing blue “NEWNAN” on the pedestrian bridge spanning I-85 highlights the union formed by LINC—which is not an acronym but a nod to the links created by the trail.

“Not only has it renewed an interest in wellness overall for members of our community—visitors and residents alike—it’s actually created a connection opportunity,” said Newnan Assistant City Manager Hasco Craver.

That said, LINC is a trail for casual exercise rather than transportation. Picture moms with strollers, retired couples, and leisure cyclists who seek uninterrupted trails. With that audience in mind, the city decided not to allow motorized vehicles, Craver said.

Kim Learnard, director of Friends of LINC in Newnan, lives in Peachtree City, which made a name for itself by creating over 100 miles of golf-cart-friendly multi-use paths. She said the use of a trail system is designed to meet the unique needs of each community. In Newnan, “It’s better without the golf carts,” she said. “They have a much stronger, much more robust bicycle community.” Running groups, friend groups and even yoga studios use LINC for gathering and socializing. Friends of LINC holds events and promotes the trail to increase awareness in the community. The group also raises funds to enhance the trail with amenities and public art.

“Having that advocacy arm is beneficial,” Craver said of Friends of LINC. “Anyone that is ever considering a path system like this, I would encourage a friends’ group,” he said, adding that the group’s mission should be tailored to each community’s particular needs.

A total of 26 miles is planned for LINC. Though only 1.4 miles has been constructed, Learnard said it is already impacting economic development.

“Real estate people are very interested to know where the trail is and where it is headed in the future, because it really does increase property values,” Learnard said.

In addition to the economic, health, environmental and community benefits of multi-use trails, there is the potential to connect cities and even different regions of the state. The Chattahoochee RiverLands Greenway Study released in 2020 proposes 125 miles of uninterrupted multimodal trails from Buford Dam to Chattahoochee Bend State Park, encompassing a network of greenways, blueways and destinations.

Led by the Atlanta Regional Commission, The Trust for Public Land, Cobb County and the city of Atlanta, many Georgia cities are part of a stakeholder group created in 2018. The Sugar Hill trailhead near Ga. 20 would be the northernmost entrance to the RiverLands and would connect to the Sugar Hill Greenway, according to the most recent design.

This story originally appeared in the May/June 2021 edition of Georgia’s Cities magazine. 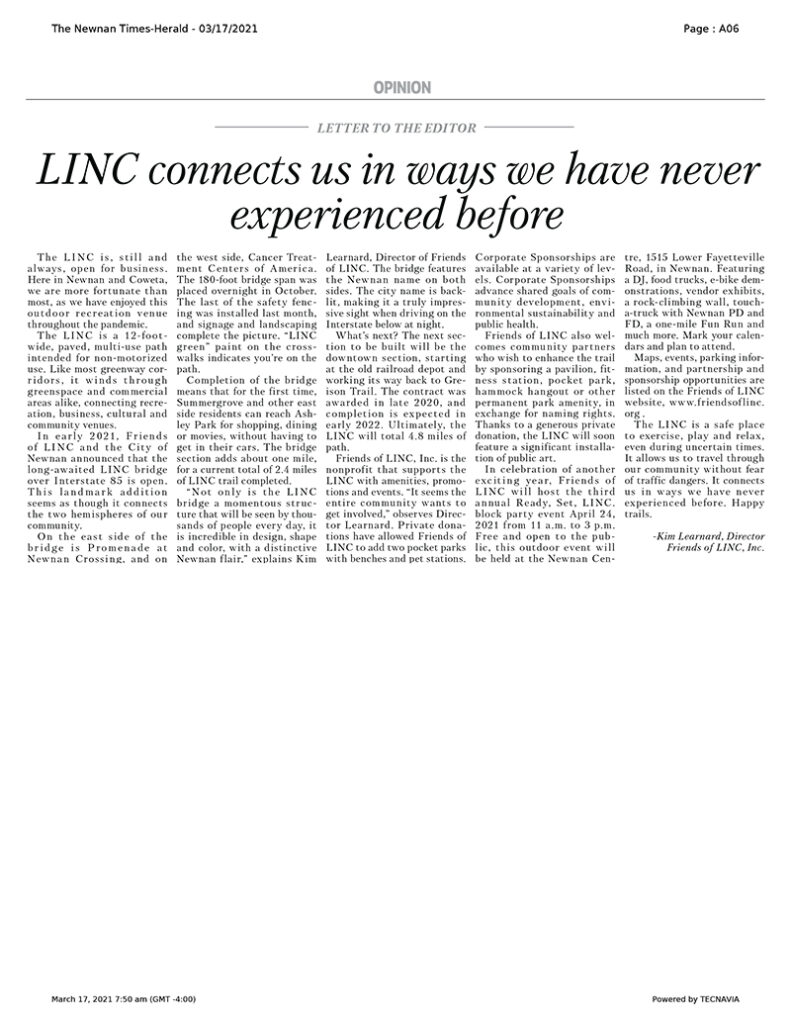 Friends of LINC, Inc. welcomed a new rock garden installation thanks to EDI, Inc. and Mulch and More.

Located on the LINC about 1/8 mile north of Lower Fayetteville Road, the new garden is a shady spot nestled in the hillside, perfect for wildlife watching.

The LINC adds to the growing list of linear parks in Georgia, including the Atlanta Beltline, the Silver Comet Trail, the Carrollton Greenbelt, The LaGrange Thread and a host of other paved trail systems. This thing has really caught on.